Sick or Dead Flying Foxes/Bats = Do not touch!! 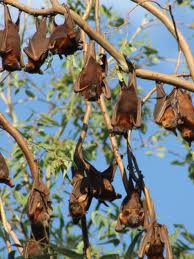 Dry conditions and absence of food is resulting in Bats/Flying Foxes dropping out of the sky across the region. However, what appears to be a dead Bat/Flying Fox may in fact still be alive and possibly have a live baby tucked under its wing.

If you need to remove a Bat/Flying Fox, please do not handle, instead pick it up using a spade and wear pierce-proof gloves, disposing of the body into a cardboard box or similar and then into your wheelie bin or local landfill. Do not make direct physical contact with the bat.

Council has had an increase in calls regarding dead and seemingly dead Bats/Flying Foxes. Due to weather and reduced food source this year the Bats/Flying Foxes are starving and acting strange.

Wide Bay Hospital and Health Service have released a statement reporting six (6) incidents in seventeen (17) days. Two (2) of these incidents involved people handling what they thought was a dead Bat.

All Bats/Flying Foxes have the potential to carry Australian Bat Lyssavirus which can only be transmitted to humans by bites or scratches from infected bats or saliva into an open wound. If you are scratched or bitten seek medical attention immediately.