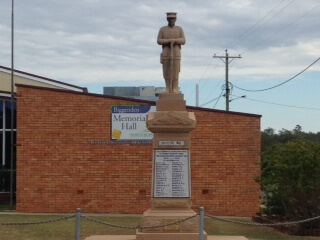 The Queensland Government, through the ANZAC Centenary ‘Lasting Legacies’ grant program, is supporting an upgrade of local war memorials.

Council was recently successful in a project titled ‘Upgrade and Cleaning of War Memorials in the North Burnett’, where the Queensland Government provided funding of $29,400.00.

Mayor Rachel Chambers thanked the Queensland Government for the funding and acknowledged that the project will not only involve an upgrade and cleaning of eight (8) war memorials, it will commemorate the outstanding service and sacrifice of North Burnett residents in Australia’s military history.

“The memorials play a significant part in the North Burnett history, providing a visual reminder of the loss of life, and ensuring recognition for those who made the ultimate sacrifice for their Country,” Cr Chambers said.

“It is also important to remember the educational role of the memorials whereby young and older people alike can learn more about the history of conflicts and the impact they had on the North Burnett community.”

Cr Chambers said that “the war memorials also provide a focal point for commemoration for events such as ANZAC Day and Remembrance Day.”

“Council is pleased to partner with the Queensland Government to protect and revitalise the memorials which represent an integral part of our local war history and serve to enhance local understanding of the values those efforts instil in our community,” Cr Chambers said.

Further updates about the schedule of works will be provided, once the maintenance program is finalised.