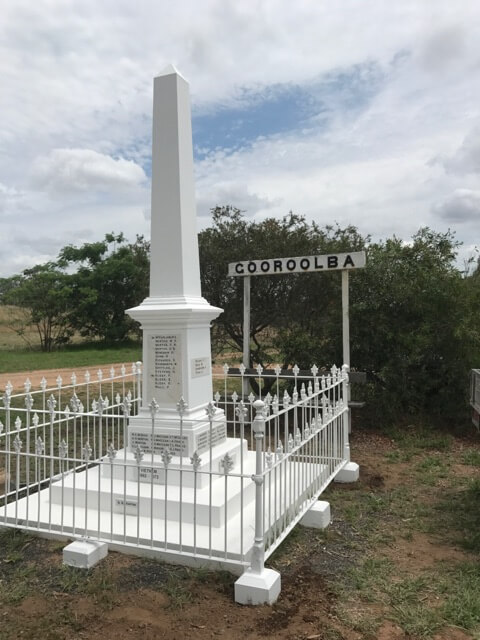 The ‘Upgrade and Cleaning of War Memorials in the North Burnett’ project, funded through the Queensland Government’s ANZAC Centenary ‘Lasting Legacies’ grant program, is now being finalised, with the official unveiling of the project to occur during the Gayndah Remembrance Day Service on Saturday, 11 November 2017.

Community members are invited to attend the combined Remembrance Day Service, hosted by the Gayndah RSL, along with the project unveiling, organised through North Regional Council, being held at the Gayndah War Memorial on Capper Street, Gayndah commencing 10:30am.

Saturday the 11th of November 2017 will mark the 99th anniversary of the Armistice which ended the First World War (1914–18). Each year on this day Australians observe one minute’s silence at 11am, in memory of those who died or suffered in all wars and armed conflicts.

Mayor Rachel Chambers explained that with North Burnett war memorials providing a focal point for commemoration for events such as ANZAC Day and Remembrance Day, coinciding the launch with this year’s Remembrance Day service will not only allow local RSL members to be involved but will assist with informing a wider audience on this important historical project.

Mayor Cr Rachel Chambers advised, “The upgrade works to the war memorials involved cleaning, polishing of marble and metal plaques, repainting missing letters and coating bronze plaques with protective enamel. In some cases, metal plaques and fencing were temporarily removed for cleaning and restoration, with all aspects of the project completed according to State Government guidelines and community expectations.”

For further information regarding the project please contact Council’s Technical Services staff on 1300 696 272 (1300 MY NBRC).

This project is proudly supported by the Queensland Government.