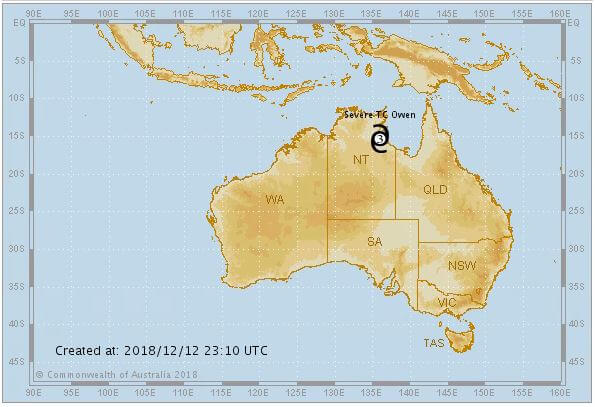 Tropical Cyclone Owen is currently a Category 2 strength system in the southern Gulf of Carpentaria and forecast to remain slow moving today, before turning back toward Queensland tomorrow.

“A coastal crossing along the southeast Gulf of Carpentaria on Friday afternoon is the most likely scenario with Cyclone Owen forecast to move in a southeasterly direction, weakening over land,” he said.

“Heavy rainfall will be one of the major impacts of this event. A Flood Watch has been updated today to include catchments from the Daintree to Townsville and this will likely be expanded in the coming days.

“Forecast models are now fairly consistent in bringing the system down Queensland’s east coast as a low, with impacts including heavy rainfall with the potential for flash flooding and damaging to destructive winds.

“Comparisons have been made with the path of Cyclone Oswald in January 2013. Cyclone Owen is a smaller system which is likely to move more quickly under the influence of strong steering winds associated with an upper trough.

“It’s important to be aware that before we begin to feel the effects of this system in the south-east we are also forecasting severe thunderstorms with heavy falls in southern Queensland on Friday and Saturday.

“We’re certainly in for a very active end to the year weatherwise,” said Dr Wardle.

For the latest information see Warnings and www.bom.gov.au/cyclone